16 August 1945. A three-day conference of the Anti-Fascist People’s Freedom League (AFPFL), the umbrella organization pushing for Burmese independence, begins at the Naythuyain Theatre on Kandawgyi Lake in Rangoon. With Aung San in the chair as acting president, the assembly calls for the establishment of a provisional national government and national elections for a constituent assembly after the end of the British military administration. Delegates also demand the rebuilding of a permanent Burmese Army with resistance troops and the Patriotic Burmese Forces at its core. 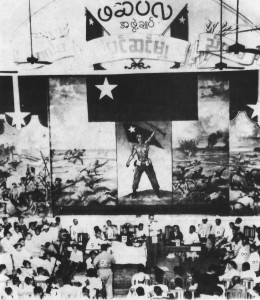