A general arrests a prime minister

In 1982, the British journalist Anthony Barnett was doing extensive research on modern Cambodian history. In publications about British military activity in French Indochina in the closing months of 1945, he came across the name of Lt. Col. E.D. Murray DSO, OBE , an Indian Army officer who had been named by the British as Supreme Allied Commander in Cambodia in October 1945.

Barnett discovered that Murray was living in retirement in the seaside town of Worthing and would be happy to talk about the past. Barnett recorded several hours of Murray’s colorful reminiscences and edited the transcripts for publication. Sadly they were never published and Murray died in 2002. The excerpt that follows is printed with Barnett’s permission.

Murray arrived in Phnom Penh on 8 October. On the 11th, he flew to Saigon to suggest to his superior, General Gracey, that Son Ngoc Thanh, Cambodia’s nationalist and pro-Japanese prime minister, be removed from office by the French. The recently arrived French commander, General Leclerc, agreed and Murray returned to Phnom Penh.

On the afternoon of 15 October, Murray arranged for Son Ngoc Thanh to wait in his office while Murray went to Phnom Penh airport to meet General Leclerc. His narrative follows:

Murray: We arrived at my headquarters and went into my office. It was like a comic opera. There was the Prime Minister with [my associate, Major] David Wenham, chitter chattering about elephant shoots, and General Leclerc strode in, pushing me aside, with his gunman. He had a gunman, who had a gun in a shoulder hoister up under his shoulder. The gunman put his hand up on the holster. And Leclerc just looked straight at the corner of the [very large] room. Poor little Prime Minister thought Leclerc was welcoming him and got up sort of to say “How lovely!" He was seized by the scruff of the neck by this gunman, hustled into the car and off they took him. I never saw him again. Or General Leclerc.

Barnett: Did Leclerc say, ‘I arrest you?’

Murray: Nobody said anything. Nobody said anything. It really was quite extraordinary. Leclerc and the gunman pushed me aside; in my own office, damn it, walked in. Leclerc had a stick, he looked at the top corner of the room, the poor little man was down there. The gunman was walking with his hand [on his holster]. It really was … David and I felt terrible about it afterwards. It was so unnecessary. We would have done it much better, I think. It could have been done much better.

Epilogue: From other sources I learned that Thanh’s chauffeur, seeing Thanh being spirited away by Leclerc, was able to drive off and warn some of Thanh’s nationalist colleagues in time for them to evade arrest. At lunch, Thanh had denied a report that had been broadcast by Radio France that he was soon to visit Saigon in order to invite the French to reimpose their Protectorate.

David P. Chandler is Emeritus Professor of History, Monash University. He has degrees from Harvard, Yale and the University of Michigan. Between 1958 and 1966 he was a US Foreign Service Officer and served two years in Phnom Penh. From 1972 to 1997 he taught SE Asian History at Monash University. He has also held adjunct positions at several American universities and at the University of Paris. His books include A History of Cambodia (4th edition, 2007), Brother Number One: a Political Biography of Pol Pot, (2nd edition, 1999), Voices from S-21: Terror and History in Pol Pot’s Secret Prison (1999) and Facing the Cambodian Past: Collected Papers, 1972–1994 (1996). 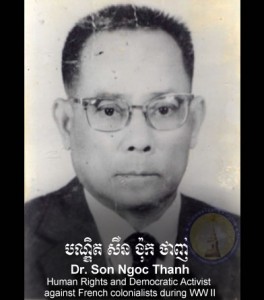 Son Nok Thanh as remembered by his supporters