After the defeat of their common enemy, the rivalry between the KMT and the CCP was further intensified. On 10 August 1945, the CCP’s central committee ordered a large-scale counterattack, aiming at the main cities and transportation arteries after Japan’s surrender. In response, Chiang Kai-shek, apart from requesting that the Communists refrain from independent actions, ordered the surrendered Japanese armies to maintain order and secure military supplies in the occupied areas until KMT forces could assume full control. The KMT’s authority to assume such control was underlined in General Order No. 1.

A third step in the game of chess between the CCP and KMT was an attempt to institutionalize principles and power arrangements between the two. Urged by Stalin, Mao Tse-tung, in the company of Chou En-lai, Wang Jo-fei, and Patrick J. Hurley, the U.S. ambassador to China, flew to the wartime capital Chungking on August 28 for six weeks of peace negotiations. Chiang and Mao met eleven times and worked out issues of principle and broad outlines of an agreement, while teams led by Wang Shih-chieh and Chou En-lai focused on the details. Three key issues dominated the discussions: government structure (the CCP was interested in developing a coalition government), the scale of each party’s armed forces, and who would control which ‘liberated areas’.

The CCP side made certain concessions, which also served their own interests, including a reduction of its military to between 20 and 24 divisions and an agreement to withdraw troops from several lightly-occupied southern provinces for better concentration on the Northeast. However, none of the major divergences was resolved with proper consensus. Chiang steadfastly insisted that military command and government administration must be unified, thus refusing to recognize the CCP-led governments in the ‘liberated areas’. Mao, who had observed 18 years earlier that ‘political power grows out of the barrel of a gun’, resisted not only the idea of government-military unity but also of Communist armies being completely incorporated into the Nationalist array.

A twelve-clause communiqué was finally issued on October 10, in which the two parties pledged to accept the principle of peaceful national reconstruction, to resolve any disputes via negotiation, and to ensure the legal and equal rights of different political parties. The CCP recognized the legitimacy of the Nationalist governance over China and abandoned its demand for a coalition government. The two sides also agreed to convene a political-consultative conference and end the phase of Political Tutelage as soon as possible. Despite this document, the negotiations achieved nothing substantial but shifting the unresolved problems to another conference.

Tacit races and clashes for seizing territories, arms and equipment continued throughout the negotiations. On September 19, the CCP’s central committee released a strategic vision of ‘developing into the north and defending against the south’, that is, deterring the southern Nationalist forces from northward advance and thus alone taking control of Jehol, Chahar and Manchuria. The Soviet army facilitated the CCP by preventing the KMT’s entry into these areas and even turned over to the Communists a considerable amount of armaments seized from the Japanese. The Nationalist side took countermeasures. Chiang ordered distribution of The Manual for Suppression of the Bandits, which included principles and tactics for defeating CCP forces. Also, with the help of American airplanes and vessels, troops were transferred quickly to the North and Northeast. China, again, was on the edge of a split.

Disappointed by the reality of his ineffective efforts, Hurley announced his resignation on November 27, accusing State Department officials of favouring the Communists behind his back, as for example when they said that the Nationalists may not use US-provided weapons in the civil war against the communists. President Truman then sent his special envoy, General George Marshall, to continue US mediation in China. The CCP and KMT signed a truce under domestic and international pressures in January 1946 and convened a political-consultative conference, but these helped little to melt the hostilities. The consequent second KMT-CCP civil war concluded with the crushing defeat of the KMT and its major retreat to Taiwan in 1949, the year Mao announced the establishment of the People’s Republic of China in Peking. 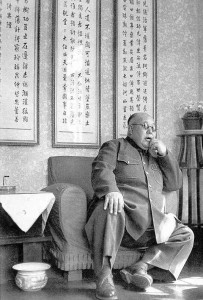 British sailors on horseback are seen patroling the streets of Kowloon City on Kowloon Peninsula, in October 1945, shortly after the British dependency Hong Kong was retaken by a task force of the British Pacific Fleet. The crown colony had been under Japanese occupation for almost four years. (AP Photo)