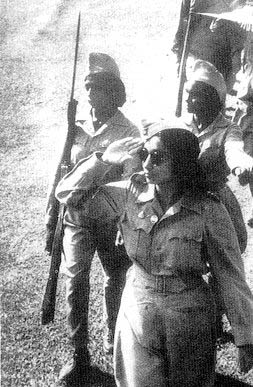 Captain Lakshmi Saghal in 1945, as commander of the Rani of Jhansi Regiment and in 2005, as member of the Rajya Sabha, India's upper house of parliament

When Subhas Chandra Bose took command of the Indian National Army in Singapore in June 1943, he shocked the Indian expatriate community by announcing he wanted women to join the freedom fight. Many, mostly young girls from all religions, castes and social classes raised in the Indian diasporas in Malaya, Burma and Thailand, enrolled in the INA’s all-female Rani of Jhansi Regiment. A contingent of combat-trained Ranis was deployed to Burma in May 1944 but plans to cross into India were never realized, as the British drove the INA and Japanese back into Burma. When British troops were only days away from the Rani camp in Rangoon, Bose ordered the Regiment to retreat to Bangkok despite Rani protests, the last 50 departing on 24 April. Only two died in enemy attacks.

Two sisters aged 18 and 20 stayed on in Bangkok after most of the Ranis had left for their homes in Malaya. Bose invited them to dinner with other INA officers on 16 August. One will never forget that Bose, sensing her anxieties, put his hand on her head like a father and told her not to worry. She asked for an autograph, and Bose wrote in her book: ‘Live for others – if you want to live.’ The Ranis heard of his death a few days later.

Vera Hildebrand is a research associate at the Nordic Institute of Asian Studies, Copenhagen. Her latest is Women at War: Subhas Chandra Bose and the Jhansi of Jhansi Regiment, published by HarperCollins in 2016.

Rani recruits in Singapore, late 1943. The central portrait is of the regimental namesake, Rani Lakshmibai, who died in battle in 1858 while defending her state, Jhansi The original Rani's image can be seen throughout India. Shown here in her home town of Jhansi, Uttar Pradesh