10 August. Uncertainty about who will do what, and when, characterizes the entire region in mid-August. While the Philippines, for example, is beginning to rebuild after years of war and Japanese occupation, the country seethes with preparations for the invasion of Japan. U.S. military supplies pour in. Hospitals and other facilities are established in anticipation of the invasion efforts. Elements of the Philippine Army are also involved. Early but unconfirmed news of Japan’s surrender on the 10th results in premature celebrations in Manila, including the firing of weapons. Similar early celebrations erupt four days later when the U.S. Office of War Information newspaper Free Philippines prematurely announces the end of the war. 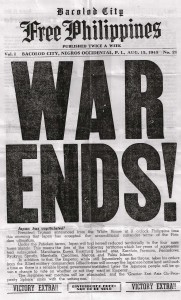