4 November 1945. Despite the presence of Chinese occupation forces in the city, a small force of local officials and Lao Issara troops seizes control of the royal armoury and royal treasury in Luang Prabang, thus enforcing the ousting of the king and transfer of central authority from Luang Prabang to Vientiane. The Lao Issara government follows up on the 10th by formally deposing Prince Savangvatthana as crown prince. The loss of face suffered by the royal family embitters relations and has long-lasting effects in subsequent decades. 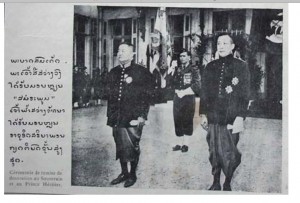