22 October 1945. The mass Islamic organization Nahdlatul ulama agrees to and issues a major fatwa. This declares the fight for Indonesian independence to be a holy war (jihad fi sabilillah). The fatwa is framed in light of the increasing conflicts in the Surabaya area, and states that participation in the fight is mandatory for all Muslim men within a day’s walk of the city. This is the most widely known of the flood of fatwa issued in the early revolution. 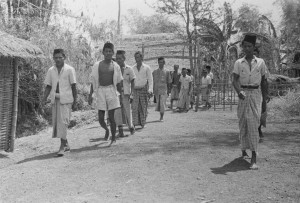