23 September 1945. His control slipping in both the city and countryside, General Gracey surreptitiously re-arms French POWs, urged on by French commissioner Jean Cédile. In the evening, with British agreement, these troops stage what effectively is a coup, seizing the Town Hall, where they raise the tricolour, and unseating the Viet Minh from many other buildings. The head of the Administrative Committee and several of his soldiers are taken prisoner. When the French run amok, violently assaulting Vietnamese civilians, Gracey tries to rein them in, but their actions have already irretrievably inflamed tensions in the south. 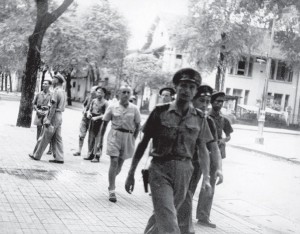