14 August 1945. Upon receiving long-awaited formal Japanese agreement, Emperor Bao Dai proclaims abrogation of the treaties signed with France in 1862 and 1874, thus formally making Cochinchina a part of Imperial Vietnam. Nguyen Van Sam receives credentials as Southern Region Imperial Delegate, locates sufficient fuel for his automobile and begins the potentially perilous drive south. The same day in Saigon, Japanese officers are present at both the formation of a National United Front of groups opposed to the French return and an impressive ceremony of 50,000 Vanguard Youth dedicating their lives to the nation. On the 16th, the Japanese authorities begin handing over offices to the United Front. However, when Vanguard Youth then hijack a huge arms convoy, on his arrival in Saigon Nguyen Van Sam urges the Japanese to arm other groups less influenced by communists. 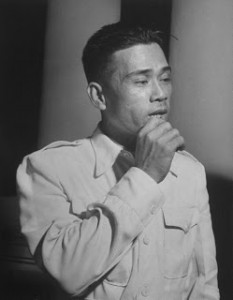