28 September 1945. Mindful of Japanese briefings on the local situation and hearing news from RAPWI teams of growing disorder, especially on Java, Mountbatten seeks to soften the Anglo–Dutch agreement. The British occupation forces about to land will be confined to ‘key areas’ rather than fanning out across Java and Sumatra. There is an uproar next day when the incoming commander of British forces, General Philip Christison, publicly states their priorities will be to secure the Japanese surrender, repatriate POWs and internees, and maintain law and order. Outside the key areas, the Japanese should maintain order until local authorities take over. When he adds ‘the British have no intention of meddling in Indonesian affairs’, he implies a de facto British recognition of the new Republic. 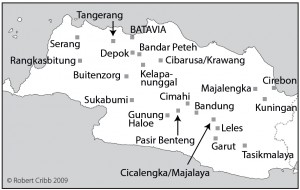