In mid-October, as the threat of violent conflict with European-led re-occupying forces became more imminent across Indonesia, Muslim leaders began to commit themselves to the Indonesian cause in a new way: by religious proclamations. Islamic scholars used fatwas or juridical decisions to encourage other Muslims to support Indonesian independence and to assure them that this was a just cause.

The earliest major fatwa was issued in Aceh, the northern tip of Sumatra, on 15 October. Quoting four different verses from the Qur’an, the local scholars who signed the decision agreed that the Indonesian fight for independence against foreign powers was a war in the way of God, and that all able-bodied Muslims were obliged to support this effort. A more famous fatwa to the same effect was issued on the 22 October in East Java by the Nahdlatul Ulama (NU), Indonesia’s largest Islamic association. The NU fatwa was even more specific, saying that all Muslim men within one day’s journey (listed at 94 km) from Surabaya were individually obliged by religious duty to travel to the city to defend it against British and Dutch forces; the duty to support the revolution was collectively (rather than individually) mandatory on Muslim men outside this radius.

These two famous fatwas were only the beginning of the religious proclamations by Muslim leaders. Soon, councils in almost every region and town were issuing such juridical decisions to encourage and reassure Muslim participants in the Indonesian revolution. In fact, so many of these fatwas were issued that in November 1945 the Vice President, himself a devout Muslim, made a government announcement forbidding anyone from declaring the Indonesian revolution a Holy War – it seems that the government feared this was sending the wrong signal abroad.

The support from religious leaders in the form of fatwas was one among many symbols of the Muslim community’s enthusiastic support for the independence struggle. Over the next four years, from 1945 to 1949, Muslims organised themselves into religiously-based militias, community kitchens, first-aid brigades, and local governmental councils to defend the nascent Indonesian Republic. The religious proclamations of October 1945 were just the first step in a whole-hearted Muslim embrace of the revolution. 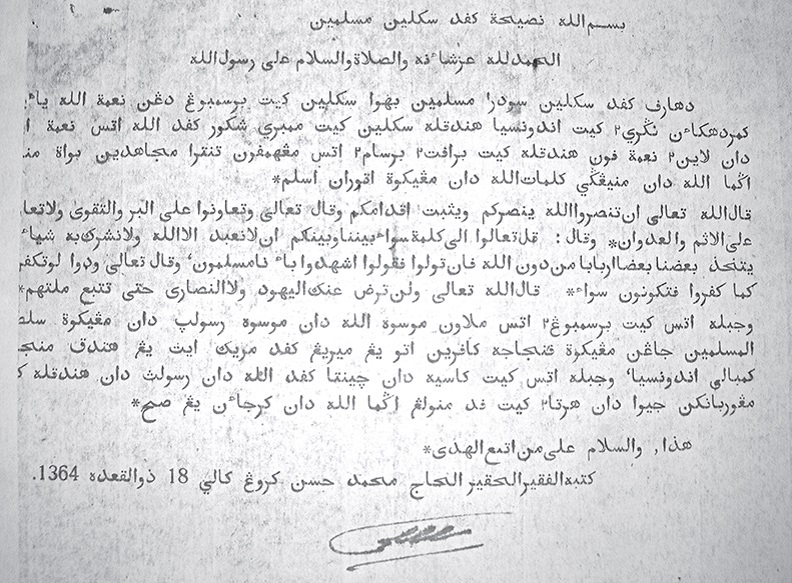