Striving for their own country: the Karen of Burma

Not everyone was swept up in the nationalist fervour inflaming much of Asia in 1945. Indigenous minorities were especially ambivalent in their responses. For them, ‘national liberation’ could mean exchanging an often privileged (but subservient) autonomy under the colonial order for citizenship of an independent ‘nation’ dominated by the ethnic majority and its culture.

Few minorities acted as if self-determination could also be for them. The Karen people of Burma were an exception, however, and in 1945 they began a struggle for self-determination that later shook the foundations of independent Burma and triggered what proved to be the world’s longest civil war.

The Karen saw themselves as one of Burma’s original people, arriving there long before the majority Burmans. Sometimes treated harshly under the ancient Burmese monarchy, many Karen gave military aid to the British during their annexation of Burma and later in its suppression of anti-colonial rebellions. Especially from 1922, they (like many ethnic minorities) enjoyed relative autonomy and were disproportionately represented in the colonial army and police. Along with other ethnic minorities like the Kachin, Chin and Naga, they rallied to the Allied cause following the Japanese invasion of Burma in 1942 and installation of a puppet Burmese state. Many Karen were subsequently killed or displaced by the Japanese and their allies, the Burmese nationalist army led by Aung San. Karen levies were instrumental in defeating the Japanese, played a major role during the British advance on Rangoon and after that killed a large number of Japanese soldiers trying to pull out of Burma in July 1945.

In the meantime, Aung San’s army had changed sides and now his Burman-dominated Anti-Fascist People’s Freedom League claimed the fruits of victory. From the fall of Rangoon onwards, it was the AFPFL’s vision of a united, independent Burma that was foremost in discussions. Hence, while Karen organizations stood under the AFPFL umbrella – indeed a future Karen leader took part in the crucial AFPFL meeting in August and attended the Kandy conference in September – Karen voices were rarely listened to in the general nationalist clamour.

Their experiences during the war and now afterwards thus united the Karen in a feeling of being victims of Burman domination and aggression. In a mass meeting held in June–July, Karen nationalists worried that the culture and identity of Burma’s ethnic minorities were threatened unless the colonial government intervened and secured some kind of autonomy and protection. However, with the great defender of the Empire, Winston Churchill, losing the British general election in July and the new Labour government apparently favourable to a ‘handing over Burma’, the Karen would need to look after themselves.

A second mass meeting, held in Rangoon on 1–3 October, aimed to address these concerns. Though initiated by the umbrella Karen Central Organisation, attendees were from the Christian-led Karen National Association, the (Buddhist) Burma Karen National Association and the newly formed socialist Karen Youth Organization. Apart from their organizational differences, attendees reflected the huge diversity and geographical dispersal of the Karen people – from Rangoon and the Irrawaddy delta in the west to the mountainous border regions in the east and south. Internal differences were to dog this conference and other Karen attempts to secure their future.

On 26 September, before the meeting, a ‘Humble Memorial of the Karens of Burma to His Britannic Majesty’s Secretary of State for Burma’ was published. This outlined a future Karen state covering a huge area, not only much of the eastern part of Burma south of the Shan States but also adjacent districts in Thailand from Chiang Mai to Mae Sot where many Karen lived. Called the United Frontier Karen State, it was envisaged this Karen state would be administered by the Karen under a British governor and be a member of the British Commonwealth. The memorial had no objections to an independent Burma, however; in due course the Karen state might even join a federation of Burma. The idea of a federation thus existed long before the famous Panglong meetings in 1946–47.

The memorial caused consternation among the Burmans (also the Mon, whose core area was enclosed in the proposal) and the British, who considered its claims for a state to be ‘absurd’. They also noticed that the delta Karen – the most advanced – were surprisingly not included in the proposal. In response, the meeting appointed a four-man deputation to argue for the memorial in London. The decision split the KCO, however, being opposed by the BKNA and KYO who wanted to negotiate with the AFPFL. Here were the roots of the split in 1947–48 when the younger, militant Karen leaders boycotted elections and prepared the Karen ‘revolution’ while a ‘union’ group opted for a state within independent Burma. 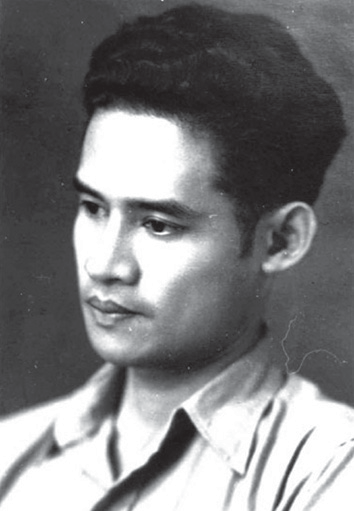 A key Karen leader after the war, Saw Ba U Gyi was part of the ‘Goodwill Mission’ that travelled to London in 1946 with high hopes of securing Karen independence but returned with nothing. The first president of the Karen National Union on its formation in 1947, he was killed in 1950 during the Karen revolt. 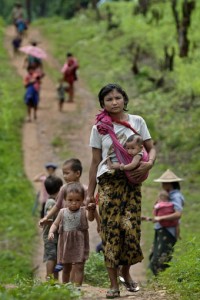 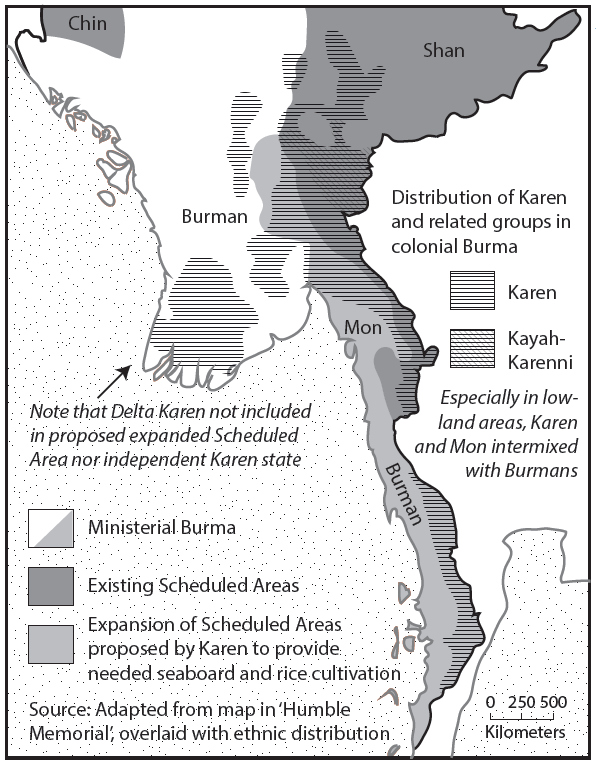