Europeans and Eurasians were the targets of Vietnamese reprisals once the French coup de force of 23 September restored colonial control over Indochina, but so too were its long-term Indian residents. Six Indians were reported killed and a further seventy disappeared during the wave of violence which swept Saigon on 24 and 25 September 1945. Nor were Vietnamese objections to the French return the sole politics at play. Events in Saigon in those few short days in late September 1945 were shaped by Indian nationalist questions as well as Vietnamese ones.

Among the Indians who disappeared was Antoine Ratinassamy. A Hanoi policeman, he was one among many men in Indochina’s municipal police forces and its colonial army who originated from France’s possessions in India. Descended from three generations of loyal Indian Indochinois, he was a French citizen like his forebears, and had attended Hanoi’s prestigious Lycée Albert Sarraut. He was also Tonkin-born and fluent in Vietnamese. On leave in Saigon in civilian dress, he was seized by the Viet Minh on the outskirts of Saigon on the afternoon of 25 September.

Saigon’s resident Indians later told a Government of India representative that the use of British Indian troops and the employment of Indians in French police and army forces turned the Vietnamese against them. There were grounds for their convictions. Britain was widely criticized for placing its 20th Indian Division under General Gracey to oversee the Japanese surrender in Southern Vietnam. Nehru was by then an Indian leader with global influence; he and other Indian nationalists publicly condemned the use of colonial troops to suppress nationalist movements. In their internal correspondence, Southeast Asia Command Chief Mountbatten and India’s Viceroy Wavell fretted over the risks of the same. Soldiers from France’s possessions on the subcontinent had a long history of engagement in the colonial army in Indochina; during the coup de force, some of them were seen forcibly removing Viet Minh representatives from their seat of government in the south.

Like other migrant communities across Southeast Asia, overseas Indians were ambivalent towards nationalist movements in the places which hosted them. Antoine Ratinassamy’s story cannot be explained solely on the grounds of Vietnamese aggression. The known facts of Ratinassamy’s disappearance, compiled by his father, rely on information from escapees, political activists, and a network of Indian merchants stretched from Hanoi through Saigon to Bangkok. They provide no satisfying answers, but offer an honest account of ambiguous political allegiances in times of tension and uncertainty.

In one view, Ratinassamy’s allegiances appear to have lain firmly with the French. When first seized, he posed as a ‘Bombay’ merchant, for fear his captors would do him more harm if he identified himself as a French police officer. He helped other Indians and Eurasians to escape, and tried himself to escape several times. When Ratinassamy encountered Vietnamese classmates from his French lycée who had joined the Viet Minh, he consented to work with them; but this, his father reasoned, was ‘mostly to save his life’.

Yet there are as many indications that he did not want to be saved. A Cambodian nationalist saw him at the home of the head of the Viet Minh in Bangkok. Indian merchants passing through spotted him at several public places in that city, always in Viet Minh company. A final annotation to his father’s summary, penned in late 1948, pinned Ratinassamy’s location to the provinces of central Vietnam but did not suggest he was being held against his will.

There is no evidence that Antoine Ratinassamy was connected with the Indian National Army. Since the Japanese surrender, a number of Indians working for Subhas Chandra Bose’s cause remained under arrest in Saigon. This group included local residents and leading members of his government-in-exile. In mid-September 1945, Viet Minh leaders made use of INA detainees to help them produce crude leaflets targeted at Gracey’s Indian soldiers. ‘Why do you shed blood for the colonisers?’ these handbills cried in efforts to stir anti-colonial sympathies. Gracey’s private papers show it was the subversive cooperation between the Viet Minh and the INA which convinced him to hasten the French return to power.

Members of Vietnam’s remaining Indo–Vietnamese community began to profess more clear-cut political commitments than Antoine Ratinassamy’s. Mahamas Bibi, the young daughter of an Indian textile merchant, met her Vietnamese teacher every morning at a Viet Minh base outside of Saigon. She would bring with her food, medicines, clothes and notebooks stolen from her father’s stores, and carried secret documents back from the base to Saigon. Only later did she come to understand the political importance of her actions. Moritam, from a family of Indian dairymen, was an active teenage participant in local Saigonese militia attacks against the Japanese. He went on to follow the militia when they accepted Viet Minh leadership. While Bibi describes herself as a ‘child of the revolution’ and Moritam rose to the position of a high communist official, Ratinassamy’s position remained more ambiguous. In the end, his family were never sure if he stayed with the Viet Minh out of fear or choice. Their only certainty was that he never came back.

Natasha Pairaudeau is a research associate at the Centre for History and Economics, University of Cambridge. Chi P Phuong is a researcher of Literature at the Vietnam Academy of Social Sciences 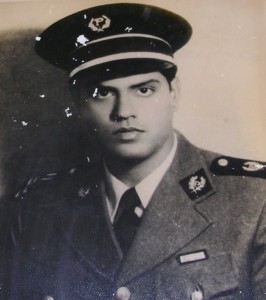 Antoine Ratinassamy in Uniform (with kind permission of his nephew, Maurice Sinnas, Pondicherry)