Looking for Din after the war

Ivor H.N. Evans started looking for his friend, Din bin Brahim, as soon as he could think about life after the war. Evans was a British anthropologist and archaeologist whose work from the 1910s on the indigenous peoples of Malaya and Borneo was hugely influential. Din was cook, guide and friend to Evans after they met in Malaya in 1919. Before Evans was interned in May 1942, he packed the manuscript of his autobiography, photograph negatives and cinema film and told Din to hide them.

Evans was first interned in Jesselton but was moved several times, eventually arriving at Batu Lintang Camp, Kuching, where he remained until the war’s end. The camp was a POW and civilian internment camp holding British, Australian and Dutch POWs, as well as civilian European men, women and children and priests. Evans, like most other internees, suffered from disease due to limited and poor-quality food. The internees had a small death-rate overall – unlike the POWs who died in greater numbers for want of food and overwork. Evans writes in his unpublished autobiography that, when Australian doctors arrived at the camp on 8 September, ‘the more than six hundred graves were eloquent, though silent, witnesses against the Japanese administration.’ (For more on internment camps, see ‘Forced Labourers’, ‘Kazuki, witness of art’, and ‘Dutch Internees and their rescue’.) The camp was formally liberated by Australian troops on 11 September.

Din’s fortunes during the war were quite different from Evans’. He and his wife, a woman from Labuan, were in Kota Belud but hurried to Labuan upon hearing of an anti-Japanese uprising. He gave Evans’ materials to a Chinese man who was to send them to his Dusun wife’s village. Yet the materials were still in Kota Belud when it was bombed; the man’s wife was killed and everything Evans left to Din destroyed. In Labuan, Din and his wife built a small house and planted hill rice. Soon they attracted unwanted attention from Salong, the headman of a nearby village, who sent Din’s name to the Japanese authorities with the recommendation that he be made village policeman. Din and his wife fled Labuan and stayed in Sapong Estate near Tenom, where he operated machines for the Taiwan Company.

The Allied assault on Borneo began in May 1945 and organized Japanese resistance had ended by late July. Around the time of the surrender, Din and his wife were living in Tenom, where they had bought a house and some land. They supported themselves by running a coffee stall and trading molasses made from cane they grew themselves. They were in Tenom when they heard that Evans was looking for them.

After the war, Evans’ first priority was finding Din and recovering his material, though this proved to be difficult due to the slow reestablishment of communication within British Borneo. On 14 September, Evans arrived at a military hospital in Labuan where the majority of the former internees were taken and where Lady Mountbatten later came to visit. While in hospital, he asked the British Borneo Civil Affairs Unit and the British North Borneo Civil Service if they could locate Din. He was informed that the last they knew of Din was that he had left Kota Belud in 1942.

In less than a month, Evans was moved to a convalescence camp. He then occupied a small house on Labuan after he successfully wrestled permission from the post-war authorities to stay in Borneo instead of being shipped back to England.

Meanwhile, Din travelled to Beaufort where he twice applied unsuccessfully for a pass to Labuan. Eventually, Din hired a local boat in Weston to take him to Labuan and was permitted to land without any difficulty. On 28 November 1945, Din rejoined Evans, who wrote that he looked skinny but in good health. Din’s wife was brought over some weeks later. She was very upset at having been left by Din for some weeks, calling Din a binatang (beast).

In Evans’ first postwar academic book, his 1953 ethnography of Tempasuk Dasuns in North Borneo, the dedication reads: ‘To Din bin Brahim, companion of my travels for more than thirty years, whose care of me has made this work possible.’ The friendship between them spanned the history of Malaya and British North Borneo from the height of British control, to war and eventually decolonization.

This vignette is largely based on Evans' unpublished autobiography, The Years Behind Me, available at the Cambridge University Museum of Archaeology and Anthropology.  (See also Ooi 2011, Evans 1948, Evans 1953.) 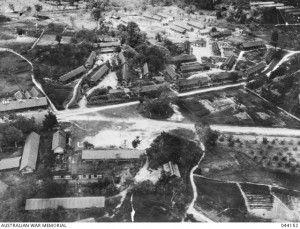 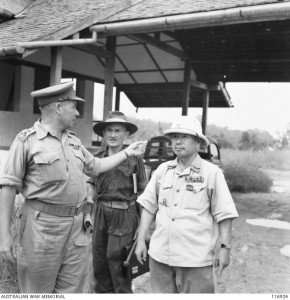 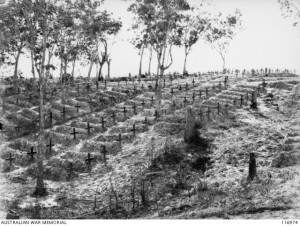 The cemetery at Batu Lintang camp