It is clear that, by war’s end, both Australia and Portugal intended to take and enforce the terms of surrender of the Japanese in Portuguese (East) Timor. According to W.D. Forsyth, the senior Australian diplomat concerned, by August–September the Australian government was determined that Australia would take the lead. Australia, he argued, had earned this privilege because it alone had resisted the Japanese. Further, Portuguese ‘neutrality had helped the Japanese to turn (Timor) into a base’ during the war and this sort of ‘neutral power’ should have no military role in the termination of hostilities (especially as Portugal was not a belligerent in the war). Portugal rejected these overtures outright, not wishing to experience a double Australian violation of its sovereignty (a reference to the pre-emptive Australian-Dutch invasion of Portuguese Timor in February 1942). A compromise position was accepted whereby an Australian military mission would act with the assistance of the Portuguese administrator.

Events moved quickly. On 15 August, the Japanese Foreign Ministry informed its head of mission in Lisbon, Morishima Morito, that Japan was proceeding to restore Portuguese Timor to Portuguese control. On 5 September, three days after the formal surrender ceremony on the battleship *Missouri *and four days after the Japanese military commander in Dili, Colonel Yoshioka, accompanied by Consul Suzuki Yoshitaro, communicated an ‘end to hostilities’ to Portuguese Governor Manuel de Abreu Ferreira de Carvalho, Tokyo notified the Portuguese government that the colony was restored to Portuguese administrative control. The following day (6 September), the Portuguese Foreign Office had informed the Allies that Portugal viewed the occupation of Portuguese Timor by Allied troops ‘with disfavour,’ especially as Portugal wished to settle outstanding questions by direct negotiation with Japan, who had already ceded de jure control to Portugal. Both Portugal and Japan had anticipated this endgame and had long been in conversation as to Japan's breach of Portuguese neutrality; Portuguese Premier António de Oliveira Salazar was adamant that a withdrawal of Japanese forces occur sooner rather than later, not only to restore the colonial status quo ante and facilitate the arrival of relief ships, but possibly also seeking to burnish his image with the Allies. In line with post-surrender realities in Japan, on 13 September 1945, Foreign Minister Shigemitsu Mamoru communicated to Minister Morishima that Japan awaited Allied instructions as to the terms of the arms transfer issue in Portuguese Timor.

The Australian Restoration (of Portuguese rule) Ceremony of 26 September 1945 As a prelude to the Australian-staged ‘restoration’ ceremony in Portuguese Timor, on 11 September 1945 Australian Brigadier Lewis Dyke accepted the Japanese surrender on behalf of the Allies in Kupang, West Timor. Two weeks later, on his arrival in Dili, Dyke congratulated Governor Ferreira de Carvalho on the restoration of Portuguese rule. The party established that there were no Australian POWs in the colony and that only 200 Japanese remained. The Australians were also keen to enlist the Portuguese in facilitating the investigation of Japanese war crimes, namely those committed against Australian commandos in Timor. According to a witness, the ‘restoration’ ceremony of 26 September was ‘a short and simple affair, held in front of the landing stage from which the Portuguese ensign flew.’

On the following morning (27 September), two Portuguese relief ships, Bartolomeu Dias and Zarco, finally arrived after a long delay. As reported in Diario de Noticias, an ‘impressive’ ceremony held beneath the tottering colonnades of the bombed-out Camara Municipal evoked a pathos of wartime suffering and patriotism as well as regeneration of the colony. In attendance were most surviving Portuguese, many local Timorese, the* moradores *or local military forces from Baucau and Manatuto, loyal chiefs and a grand display by Timorese brandishing venerated ancient Portuguese flags that had been hidden during the Japanese occupation. This was significant because, despite Japanese attempts to sow enmities among the native population (and also the small Arab community), the colonial authorities were not met by resistance activities. The arrival of the ships was more than just symbolic. Besides bringing 2,223 troops, including infantry and artillery, the mission included three engineering companies and substantial supplies of food and construction materials, thus staving off the kind of starvation and chaos that ensued in the wake of other Japanese surrender acts. (See also Gunn 1999.) 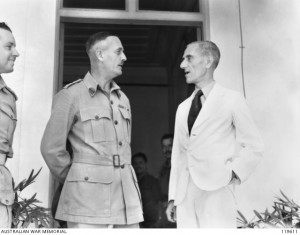 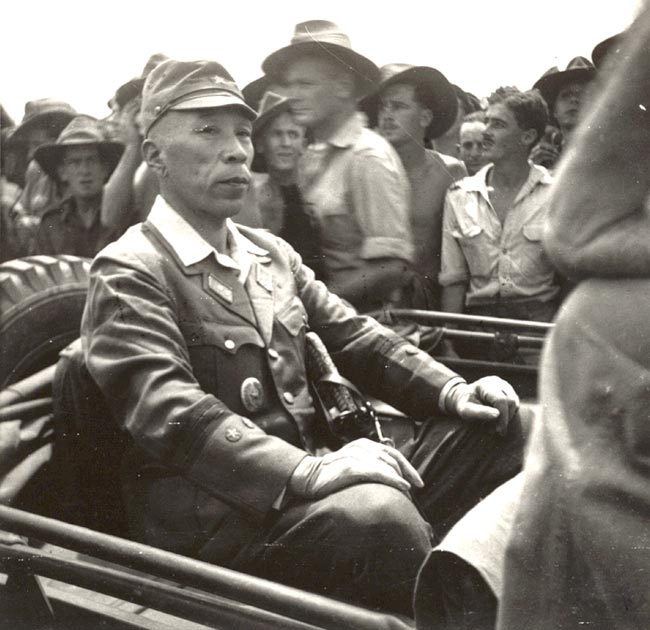 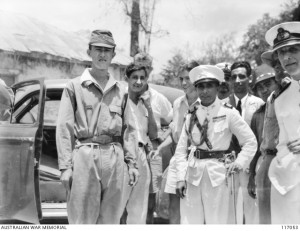 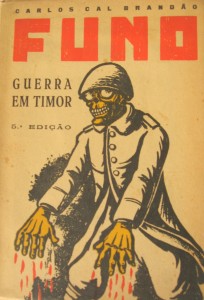 War in Timor (Porto 1953), by Carlos Cal Brandao. This was a best seller in Portugal; each subsequent edition featured a slightly more grotesque cover image.  Brandao, a true ,anti-fascist, was deported from Portugal to Timor in 1932 for fomenting anti-Salazar revolutionary activities, survived the war by joining a guerrilla group called the "Red Brigades" until retreating by submarine to Australia, joining the Allies. Post-war back in Portugal arrested again by Salazar.