The last days of Syonan

Midday, Malaya: The municipal employees had to cut their picnic short after a phone call from army headquarters. On the bus ride home, the day-trippers wondered what had happened; the weather had cleared up and it was a beautiful, tropical day. Nawa Tadanori, a civilian like the rest of the staff of the Syonan (pronounced Shōnan) Special Municipality, decided to change the subject. ‘I hope that the army knocks Australia out of the war soon,’ Tadanori said. ‘If they form a Sydney Special Municipality, I’ll be the first to volunteer!’ Not to be outdone, Kamata Hisako and other employees all at once insisted that they wanted the Sydney assignment instead. Everyone burst out laughing. ‘Thinking about that now I’m just amazed at how little we knew’, Hisako would say decades later, ‘but at the time, aside from those who worked in communications, I think that most of us Japanese were blissfully ignorant like that.’

Only four days after the cancelled picnic, on 18 August 1945, the senior staffers of the municipal government were summoned to army headquarters. There, General Itagaki Seishirō informed them that Japan had surrendered. The Emperor himself had ordered the army to lay down its arms. General Itagaki asked that they continue at their work until the Allies returned and Syonan became Singapore again.

Aono Toshio, head of the Food Control Department, was struck dumb by the announcement. He had spent more than six years travelling thousands of kilometers across East Asia, toiling for an ideal that now meant nothing. But the army had been preparing for a ‘decisive battle’ in Syonan and, as a senior administrator, he knew that the announcement had almost certainly saved him and his colleagues from a bloodbath. Strung between emotional extremes, Toshio began sobbing. So did everyone around him. When they recovered their composure, the municipal administrators set three goals for themselves: 1) to maintain public order in the city until Allied forces arrived; 2) to prepare for the handover of the municipal administration; and 3) to construct their own civilian internment camp in Jurong – at the remote Western end of the island – where they would wait for repatriation to Japan.

As they set about these tasks, the municipal bureaucrats said goodbye to their local staff. Ozaki Shunpei vividly remembers one final dinner with the employees of the Forestry and Agriculture Department. Toward the end of the evening, the department’s chief clerk, a man named Lim, stood up and assured the Japanese bureaucrats that, if the British asked him to testify about abuses he suffered during the occupation, he would tell the truth: that his Japanese colleagues were all good men and had never harmed him. Shunpei and his colleagues were moved … and relieved. The Japanese civil servants had always drawn a sharp distinction between themselves and the military administration that they were technically subordinate to. A number even saw the protection of locals from the abuses of the army as one of their primary duties. But many locals could not forget how dedicated these men and women had been to constructing Japan’s ‘New Order’ in East Asia. They were active participants in a war that had thrown the economy into disarray and drawn thousands of locals into ill-planned development schemes in the malarial jungles of the region. The civilian bureaucrats may not have participated in the massacre of Chinese men during the early occupation, but they worked toward the same goals as the military police officers who had. To many Singaporeans, the distinction between Japanese civilian and Japanese soldier was all but meaningless.

Three weeks after the surrender, most of the Japanese civilian population had already settled into their internment camp in Jurong. As the Allies landed on 5 September, essential staff waited in City Hall for the formal handover of their duties. They had prepared for extensive briefings with the returning British, but the officers who arrived to take control of the city promptly dismissed them. The next morning, after having their bags inspected by a young British lieutenant, the municipal staff shuffled off to Jurong. It was a 27 kilometer walk under the blistering tropical sun, and children jeered at them from the sides of the road. Some threw rocks.

This vignette is based on the accounts of former municipal employees in Shinozaki 1976 and Shingapōru Shiseikai 1987.

(For more on similar themes, see also the vignettes about daily life in Singapore, and about Forced Labourers)

Clay Eaton is a PhD candidate in the Department of East Asian Languages and Cultures, Columbia University

British forces are welcomed back in Singapore (Imperial War Museum) 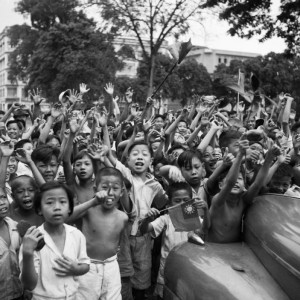