Shaping Indonesia and its government

By mid-October, the Indonesian government had only been running for two months but already it was feeling the strain. This led to a number of major decisions that transformed the structure of government and instituted a parliamentary system that would remain in place until 1959.

The Indonesian constitution, as adopted on 18 August, had implemented a strong presidential system under the leadership of a new President Sukarno and Vice-President Mohammad Hatta. These two were also the ‘Great Leader’ and ‘Vice Great Leader’ of the sole political party of the new republic, the Partai Nasional Indonesia, founded on 22 August. Some activists in the government at the time, while recognizing the importance of the Sukarno–Hatta duumvirate, wanted a position as well for a more radical leader, and also someone who was not tainted by collaboration with the Japanese. This became especially pressing as the Allies began to land, when it became clear that international diplomacy would become an important component of achieving full independence. Additionally, Indonesian politicians at the time were more familiar with a parliamentary system of government, as that was the system of the Netherlands.

Starting on 16 October, government decisions brought quick and broad-ranging changes in the structure of the Indonesian government. First, Vice-President Hatta issued an instruction that, in the absence of the elected parliament laid out in the constitution, the Central Indonesian National Committee should fulfil this role. This instruction, known as Vice-Presidential Declaration X, also included the creation of a special ‘Working Committee’ of the acting parliament that would run the legislative affairs of the country day-to-day when the full parliament could not be in session. The next day, 17 October, one of the radical youth who had kidnapped Sukarno and Hatta in August again showed his radical bent; he nominated the socialist Sutan Sjahrir to be head of the legislative body, and another socialist, Amir Sjarifuddin, as the formateur of a new cabinet. Both of these men had been in the underground resistance against the Japanese, so they were untainted by any accusations of being quislings or lackeys of the Japanese. Sjahrir put together a 15-person Working Committee, which then grew to lead the direction of the government; he became first prime minister a month later.

Even once Sjahrir and his socialist colleagues led Indonesia to a parliamentary system headed by a prime minister in October and November 1945, they needed another institution to support such a development: political parties. The single government party, Partai Nasional Indonesia, was not sufficient to reflect the various interest groups in society (or in politics), and so groups began to form even without a governmental imprimatur. This pushed the hand of Vice-President Hatta to once again issue a document, this time a Government Announcement on 3 November 1945 on the formation of political parties. The Indonesian Socialist Party had formed on 1 November but a number of other parties, including the Islamic party Masjumi (7 November) and the Labour Party (9 November) formed within a week of Hatta’s announcement, and others like the Christian Party (18 November) were founded within the month. Many of the parties that emerged merely reassembled associations from the Japanese period or before the war, and most of the leaders who emerged had also been prominent in pre-war politics.

The institutional change was important, though, as Indonesia rapidly reorganized itself – or perhaps this was still organizing itself for the first time – in a prime ministerial system. Although this was on paper an aberration from the original Indonesian constitution, it was implemented with the full consent of all of the same leaders who wrote the constitution and done within two months of the constitution’s promulgation. The prime ministerial system lasted almost fourteen years: during the Indonesian Revolution as tradition, but then formally written into the temporary constitutions of 1949 and 1950. Indonesia ceased to have Prime Ministers only in 1959, when Sukarno unilaterally (albeit with the support of the Indonesian military and some secular parties) abrogated the temporary constitution and returned to the original 1945 constitution with its strong presidential system that had hardly ever been implemented. This presidential system remains in place today. 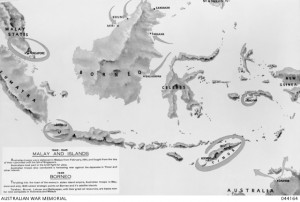 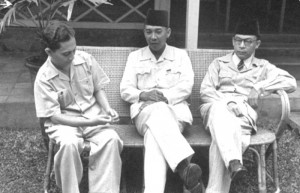 Indonesian nationalist leaders Sukarno and Muhammad Hatta (centre and right) worked closely with the Japanese to achieve Indonesian independence. However, with their knowledge, Sutan Sjahrir (left) went underground to oppose the Japanese and thus make future relations with the Allies less problematic.