Musings on the French and the Japanese

The French ethnologist Eveline Porée Maspero (1904–1992) lived and worked in Cambodia between 1934 and 1946 . In 1983, when I visited her and her husband Guy Porée in Mormoiron (Vaucluse), she generously allowed me to copy passages from the diary she maintained over the period 1942–1945. The following are my translations from the French of two entries from August 1945.

4 August: In the evening [a French colleague] Grosjean told us that Suzuki, the Japanese painter, has solemnly told him that the armistice had been signed and that at 1 AM on the 15th the Mikado would announce this to his people. So on the 15, at 1 AM on the dot (since we are on Japanese time) we drank a small glass of synthetic curaçao in honor of the end of the war. We confessed to each other, while speculating about the future, that we couldn’t help but feel compassionate toward the Japanese for, at this time when the war has finally ended, our thoughts returned to the atrocious hour in June [1940] when the Marshal [Pétain] announced the other Armistice.

17 August: The Japanese were very agitated in the days that followed the armistice. They seem to have regained their calm. They’ve been telling local people and it’s said their own people as well that they have no more to do here because they have given independence to the oppressed [Indochinese] and are now free to depart. They’ve come to believe that they’re not defeated and, like a child breaking a toy that it’s been given, they poison the Indochinese with propaganda and rumours which strike us as naïve but which have a disturbing effect on Asiatic spirits. Trouble is everywhere – in Cambodia less than in other places.

David P. Chandler is Emeritus Professor of History, Monash University. He has degrees from Harvard, Yale and the University of Michigan. Between 1958 and 1966 he was a US Foreign Service Officer and served two years in Phnom Penh. From 1972 to 1997 he taught SE Asian History at Monash University. He has also held adjunct positions at several American universities and at the University of Paris. His books include A History of Cambodia (4th edition, 2007) , Brother Number One: a Political Biography of Pol Pot, (2nd edition, 1999), Voices from S-21: Terror and History in Pol Pot’s Secret Prison (1999) and Facing the Cambodian Past: Collected Papers, 1972–1994 (1996). 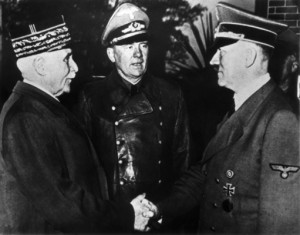 Marshall Philippe Pétain, soon to be Chief of State of Vichy France, meeting his new boss on 24 October 1940 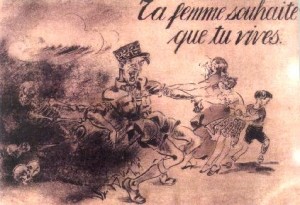 This Japanese propaganda poster, dropped over Indochina, depicts a wife and children trying to pull a French soldier away from a battlefield covered with skeletons with the text: This woman wishes that you live (courtesy psywarrior)