Proklamasi: a hurried declaration in Jakarta

On 17 August, Sukarno proclaimed Indonesian independence. It was an epochal event, but neither the text nor the ceremony reflected this. The text could hardly have been more terse: ‘We, the people of Indonesia, hereby declare Indonesia’s independence. Matters concerning the transfer of power and other matters will be executed in an order ly manner and in the shortest possible time. In the name of the Indonesian people, Soekarno/Hatta, Djakarta 17-8-’05’. It was the result of a complex interplay of Indonesian politicians among themselves with the Japanese military, divided too, and the looming influence of the Allies, with the Dutch in their wake. After years of stagnation, the twilight of Japanese empire suddenly seemed to give long-frustrated Indonesian political leaders free rein.

It started on 7 August 1945, when the Japanese Army in Saigon announced the imminent proclamation of Indonesian independence and summoned Sukarno and Hatta to Saigon to work out the details. They were also installed as Chairman and Vice Chairman of the Preparatory Committee for the Independence of Indonesia (PPKI, see Deciding the boundaries ). The 21-member PPKI excluded younger, more radical representatives, generally named pemuda, as well as the Islamic wing. On their return on 14 August, Jakarta was rife with rumours about a Japanese capitulation. Sjahrir, popular with the pemuda, visited Sukarno and Hatta and pressed them to proclaim independence without PPKI (or for that matter any Japanese) involvement, to avoid Allied accusations of collaboration. Such a charge would be hard to deny. Sukarno and Hatta had worked with the Japanese to further their independence dream, but in the process they became deeply involved in Japanese propaganda, even to the detriment of their own cause. They supported recruitment of labourers (rōmusha) who were worked to death in Indonesia and beyond. As well, the campaign to enlist Indonesian women who ended in Japanese brothels earned them a lot of criticism.

Sjahrir’s request was turned down. Sukarno and Hatta still thought they could play their Japanese and PPKI cards. With the news of Japan’s surrender this became uncertain; even the fact of surrender was itself uncertain. After some hesitation, Sukarno and Hatta decided they would proclaim independence, legitimized by the PPKI.

When the pemuda learned about the surrender on 15 August, it met immediately and strongly opposed a PPKI role in the Proclamation. A pemuda emissary sent to Sukarno and Hatta was met with an impolite rebuke. Among the pemuda, voices were heard that opted for a Proclamation without Sukarno and Hatta. But another drastic step was taken. Early on 16 August pemuda abducted Sukarno and Hatta and brought to Rengasdengklok, 80 kilometres from Jakarta, where the Japanese garrison was disarmed and the red and white Indonesian flag hoisted. In intense discussions Sukarno and Hatta could not be convinced to declare independence without a Japanese taint. In the meantime in Jakarta, the small circle of political insiders (Indonesian as well as Japanese) were desperately looking for Sukarno and Hatta, who were believed to have been arrested by the Kempeitai, the Japanese secret police.

Rear-Admiral Maeda, the highest Navy representative in Java, came to play a pivotal role. Maeda harboured sympathies for the independence movement and his official residence was the meeting-place of pemuda, who freely discussed their radical ideas there. Subardjo, soon to be Indonesia’s first minister of Foreign Affairs, was in his employ, as was a group of pemuda. Two Japanese, Nishijima and Yoshizumi, were close with the Indonesians who frequented Maeda’s mansion.

After Subardjo and Nishijima located Sukarno and Hatta, Maeda promised safe conduct and offered his house as a meeting-place where all parties could ‘discuss the proclamation in safety’. Fear of being apprehended by the Japanese thus vanished. The Allies had meanwhile issued an order that the Japanese military should maintain the status quo. This blocked any cooperation with a Proclamation and even might involve the arrest of Indonesians planning to proclaim independence. Maeda had to use all his influence to ensure an undisturbed meeting in his house. Sukarno, Hatta, PPKI members and pemuda gathered and negotiated for many hours. There was no agreement on an elaborate text; in the end, agreement was possible only on the barest of text. And, who should be the signatories? PPKI and pemuda excluded one another and, as a result, only Sukarno and Hatta signed. There is evidence that Nishijima and Yoshizumi, and thus Maeda, were closely involved in the decision-making process, but in the historiography the Japanese role is eclipsed for the sake of the myth of an entirely indigenous Proklamasi. However, one oversight was made: the date on the declaration is 17-08-’05, with the 05 referring to the year 2605 of the Japanese era. The actual ceremony was early in the morning of 17 August. It was hasty and secret, with only a few dozen bystanders, out of fear of a Japanese raid. Those present next hurried to their hiding-places, contemplating how to give substance to the newborn Republik Indonesia. 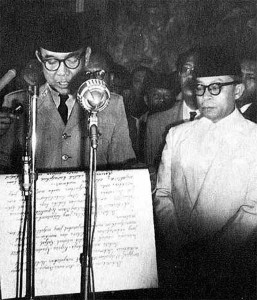 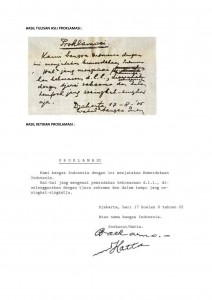 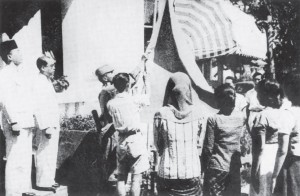 The flag-raising ceremony immediately after Sukarno read the Proklamasi at 10 a.m. on 17 August. The flag was sewn by Sukarno’s wife Fatmawati the evening before. Sukarno and Hatta are standing to the left. 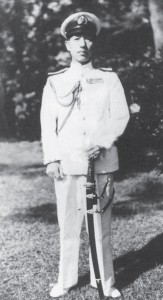 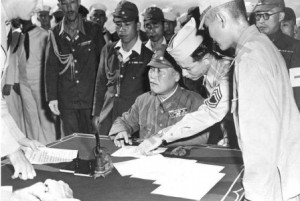 Sukarno and Hatta meeting with Admiral Maeda and General Nishimura