The Japanese Military and ‘Comfort Women’ during WW II

The term ‘comfort women’ is an awkward but widely-used euphemism for the many thousands of women recruited during the war to serve in brothels used, and often established and run, by the Japanese military throughout occupied areas of Asia. Sexual violence is a deeply disturbing aspect of war, and is evaded and obscured by historians and governments in many countries as they shape the memories of their own nation’s military history. In the case of Japan, the story of the ‘comfort women’ has in recent years become one of the most contentious issues of wartime history and memory.

Our knowledge of Japan’s wartime military brothel system is pieced together from a wide variety of sources. These include: many hundreds of pages of official documents collated by the Japanese government in preparation for its 1993 statement of apology (the Kōno Statement); other official documents unearthed by historians; reports of the interrogation of Japanese prisoners of war captured by U.S., Dutch and other Allied forces around the time of Japan’s surrender; testimony of surviving ‘comfort women’; material presented in war crimes trials of Japanese prisoners of war; material presented in civil court cases for compensation brought by surviving women; and eyewitness testimony of third party witnesses such as Allied prisoners of war and civilian residents of areas occupied by Japan.

From this we know that the military brothel system was very large and far flung. It extended from Manchuria in the north to New Guinea in the southeast and the Andaman Islands in the southwest, and covered much of East and Southeast Asia in between. Eyewitness testimony includes repeated statements such as these: ‘every division had five or six [“comfort houses”] attached. Korean women as well as Japanese women were to be found in them’ (interrogation report of a Japanese soldier who served in Burma before becoming a POW); ‘as soon as they occupied a city they [the Japanese military] brought in Korean prostitutes’ (British missionary in China 1929–44).

An Anglo–Burmese civilian living in Burma during the occupation recalls that ‘comfort women’ were referred to by locals as ‘Mei-Chosen’, meaning ‘Korean women’, and that ‘there were lots of them then’. Exact numbers are unknown, but plausible estimates suggest that between 50,000 and 100,000 women from Japan, Korea, China, Indonesia, Malaya, Papua New Guinea and elsewhere were recruited to serve in Japanese military brothels during the war.

Methods of recruitment varied widely, as did the nature of the military brothels themselves. In some cases women were ‘sold’ by their parents or induced by the offers of brokers, but there is extensive evidence of recruitment by deception and debt bondage, as well as numerous credible accounts (particularly from Southeast Asia) of the seizing of women at gunpoint. Postwar U.S. questioning of one group of Korean ‘comfort women’ in Burma found that they had been lured by the false representations of brokers, who suggested that they would be engaged in tasks like ‘visiting the wounded in hospital’ and ‘rolling bandages’. Indonesian woman Mardiyeh (b. 1926) echoed the experience of many, recalling how she was approached by a Japanese soldier who offered her a job as a laundry woman and then forced her into sexual services at a nearby barracks. Other Indonesians (like Dominggas, b. 1928) and Filippinas (like the women of the village of Mapanique) were seized by force after other members of their community were killed by Japanese troops. In a few cases, European civilian detainees in occupied territories were taken by force into military brothels.

On Japan’s defeat, these women were abandoned, and some died of malnutrition or were killed in fighting. Many were repatriated by Allied troops after the war’s end, but some found themselves unable to return home. Since the 1980s, the problem of the ‘comfort women’ has become one of the largest stumbling blocks to full postwar reconciliation between Japan and its neighbours. The Japanese government’s 1993 apology was an important step forward, but since then, and particularly in the past three years, denials of crucial aspects of this history by senior Japanese figures have again inflamed antagonisms, while some politicians and others in China and Korea have also exploited the problem for their own ends. Seventy years on, a new effort to address this history honestly and in its international context is overdue. 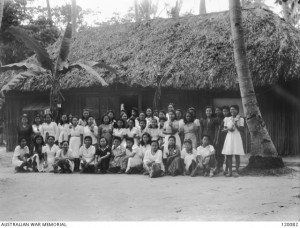 A group including twenty-six Javanese women who were liberated from Japanese brothels, 2 October 1945. (K. B. Davis; Australian War Memorial 120082) 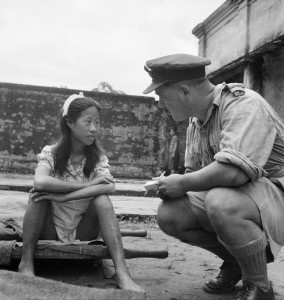 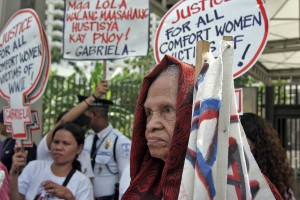 Surviving Filipino 'comfort women' and their families and supporters stage a protest rally outside the Japanese Embassy in Manila, 14 August 2015 (Photo by Vincent Go) 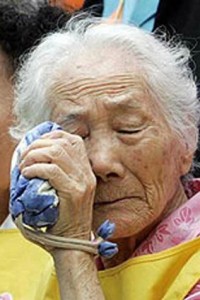