‘Uninvited’ war and the Mongol trophy

The Republic of China invited only the Soviet Union to enter its territory to wage war against Japan. The Soviets, without legal authority to do so, invited the Mongolian People’s Republic (MPR) to fight alongside them. In one sense, MPR participation in the war against fascist Japan was natural, for the MPR had stood steadfastly with the Soviet Union on both western and eastern fronts. Yet, it is also accurate to describe the MPR’s purpose in joining the ‘Liberation War’ as not just to defeat fascist Japan, but also to incorporate Inner Mongolia into the MPR. Moreover it was intended as a show of force compelling the Chinese government to recognize MPR independence. These purposes were clear from the day the MPR declared war and, from China’s perspective, they were unwelcome.

Following the Japanese announcement of surrender, the KMT, CCP, MPR and Soviet armies all raced to control as much land as possible. Their efforts were shaped by General Order No. 1, which ordered Japan to surrender directly to the Soviet Union in Manchuria and to the Republic of China in the rest of China. This order excluded both the MPR and the CCP.

On 17 September, the Soviet Union chose officially to invite the CCP into the historical lands of Inner Mongolia. This action was inconsistent with the spirit of the General Order and in direct contravention of the recently signed Sino–Soviet Friendship treaty. However, the Soviets chose a different approach with regard to their Mongolian allies. When Chiang Kai-shek discovered on 17 August that the MPR army intended to march southward to occupy Peiping and Tientsin, he ordered the 12th War Zone to meet the Soviet and MPR armies and instructed the Chinese Ambassador to the Sovi et Union to ask the Soviet government to order the MPR army not to advance southward. The Soviet government did not reply until 22 August, when it stated: ‘We have no intention of marching into Peiping and [Kalgan] … When the army of Generalissimo Chiang arrives at those places, we will hand over those places to the army of Generalissimo Chiang.’

In addition to territory, control of prisoners of war was also an issue. The Soviet Union and the MPR saw Japanese POWs as a useful source of labour. On 21 September, MPR soldiers entered Jehol [Rehe] and captured over 2,000 surrendered Japanese soldiers and confiscated their weapons ‘in violation of international convention’. Between 23 November and 10 December, 12,318 Japanese POWs were brought to Mongolia. These soldiers stayed in Ulaanbaatar until mid-October 1947. They helped build the Government Building, Sukhbaatar Square, the Ministry of Foreign Affairs Building, the National University of Mongolia, and many other buildings which still stand today as representatives of Soviet era architecture.

In addition to these Japanese POWs, less known were hundreds of Inner Mongolian POWs. They were former soldiers of Manchukuo or the Mongolian Autonomous State. Without discrimination, these soldiers were arrested as POWs and brought into Mongolia, many spending 4–5 years in prison before they were released and granted MPR citizenship. Unlike those who entered into Mongolia in groups, such as the Ujemchin Mongols from Shilinggol and Barga Mongols from Hulunbuir, these Inner Mongolian POWs were treated harshly. Due to the intra-Mongol morality for not washing the dirty linen in public, their suffering in Mongolia has never been studied in depth. It remains a mystery as to what the pan-Mongol-oriented MPR leadership intended to achieve by punishing those Inner Mongol youths who put down their weapons and enthusiastically welcomed the MPR forces as liberators.

What did Mongolia gain from this war? From the Chinese government perspective, MPR participation was uninvited and was thus ‘illegal’. And yet, at a time when world order was maintained through force, Mongolia’s biggest trophy in its uninvited war against Japan was its own independence. The ‘illegal’ capture of the Japanese POWs, whose forced labour helped to rebuild Ulaanbaatar, also helped to foster Japanese friendship; the Japanese POWs were treated with respect. This achievement may eventually compensate for the loss of Inner Mongolia.

Uradyn E. Bulag is Reader in Social Anthropology at the University of Cambridge. His interests broadly span East Asia and Inner Asia, especially China and Mongolia, nationalism and ethnic conflict, diplomacy, and statecraft. He is the author of Nationalism and Hybridity in Mongolia (1998), Oxford: Clarendon Press, The Mongols at China’s Edge: History and the Politics of National Unity (2002), Lanham: Rowman and Littlefield, and Collaborative Nationalism: the Politics of Friendship on China’s Mongolian Frontier (2010), Lanham: Rowman and Littlefield, which received the International Convention of Asian Scholars 2011 book prize in social sciences. E-mail: ueb10@cam.ac.uk 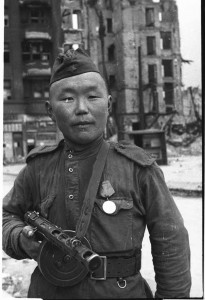 A Mongolian soldier assisting the Soviet army during the battle for Berlin. The Endangered Archives program at the British Library has an excellent collection of Mongolian-Soviet photographs from Europe. 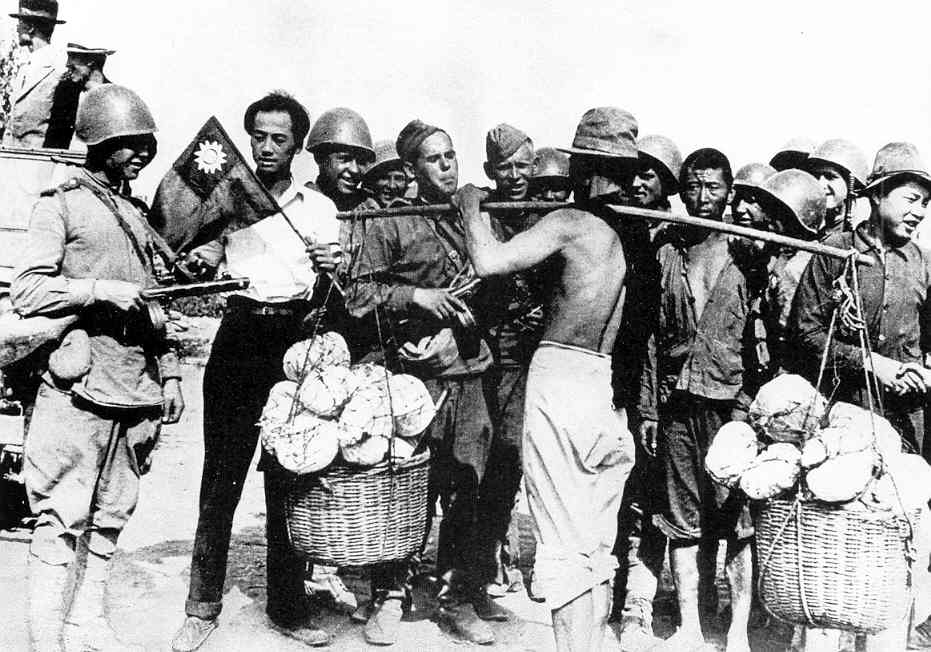 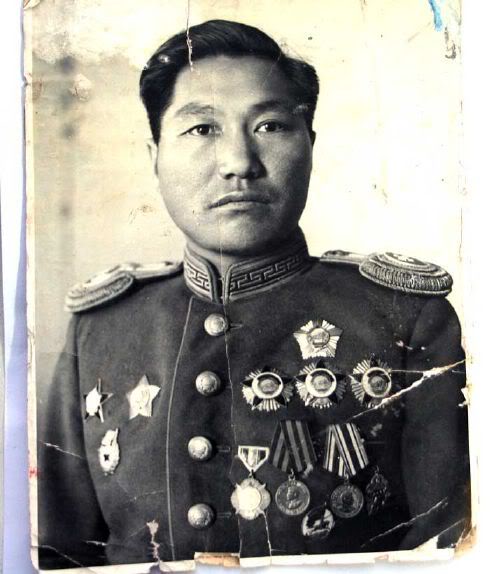 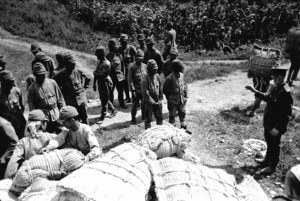 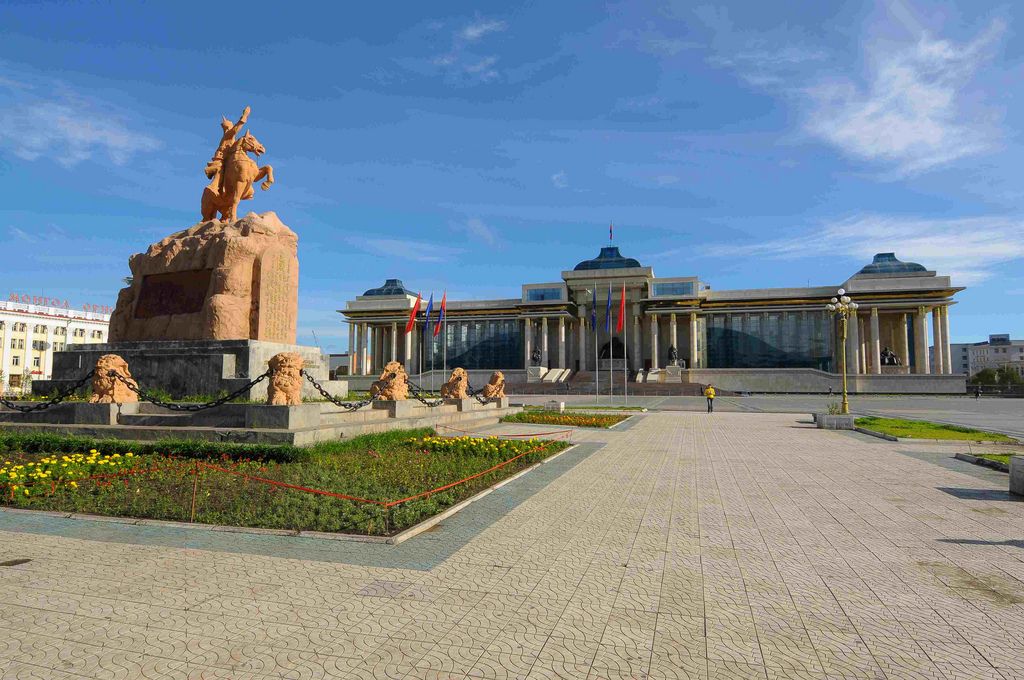