A boy in wartime Shanghai

George Kulstad, born in Shanghai in 1935, had a tumultuous childhood. His father, a Norwegian sea captain, was held captive by the Japanese, and George and his mother had to make do as best they could during the bleak war years. Unlike many foreigners, the two escaped internment after the Japanese takeover of the international parts of Shanghai in December 1941, but even so, the ensuing years were marked by hardship and deprivation. The Japanese were a constant looming presence. Kulstad has just published his memoirs, A Foreign Kid in World War II Shanghai. We asked him what it was like to grow up in wartime Shanghai. Find his fascinating answers below.

Do you have any recollections of direct contact with the Japanese army of occupation?

I had no formal dealings with the Japanese army. My mother, who spoke Japanese, volunteered on behalf of the Norwegian Consulate to call upon the Japanese Naval Landing Party headquarters, a massive structure near the Hongkew Park, to provide assistance to Norwegian merchant sailors who were illegally being held prisoner there. According to my father, she should have been awarded a medal by the Norwegian Government after the war for her service, but none was forthcoming.

Did you, as a young boy, understand that a war was going on? Indeed, did war become the “natural state of things” for you?

I was well aware that a war was going on, and I remember imploring my mother to tell me when the war was going to end. My father was a prisoner in Japan for most of the war, but my mother was able to obtain enough food to feed the rest of the family fairly adequately. We were very aware of others, though, who had almost no food. My mother took me to the Jewish ghetto to get some shoes made during the war, and I noticed that the place was very crowded, but I did not understand that it was the ghetto established by the Japanese until later.

One January afternoon, while I was in Hongkew Park, I remember seeing a Japanese Army motorcycle with sidecar suddenly reverse course and speed away. Then, a silvery American single-engine fighter flew low, fast, and directly over my head in the same direction as the motorcycle. It all happened quickly and I was quite impressed by the experience. Many years later I discovered that P-51 Mustang fighters were on that raid. I only remember a few air raids taking place, but my subsequent research showed that Shanghai underwent 25 air raids, 22 of which were American-flown, while 3 were by a Chinese and American combined unit. That unit was the Chinese American Composite Wing of the 14th U.S. Air Force, composed of air crews from the U.S. Air Force and the Republic of China Air Force.

News of the atomic bomb spread extremely fast to Shanghai. What was the mood? Was it understood that the war was over?

Rumors of the atomic bomb spread through Shanghai the same day it was dropped on Hiroshima. I suppose that military personnel in Japan passed the information on to their colleagues in China. People around me talked of an atomic bomb, saying that it was a new type of bomb that was capable of demolishing an entire city, but no one really knew what an atomic bomb was. Within a day or two I noticed an improvement in the behavior of the Japanese soldiers I encountered.

Although it was clear that the Japanese military had lost the war, there were no Allied forces within proximity of Shanghai and for about two weeks the Japanese military were the only ones with sufficient force to maintain law and order. The Chinese collaborationist government troops simply faded away. The Shanghai residents were euphoric and some took advantage of the situation to loot Japanese property. The Japanese Army responded, and I recall a nearby house being looted. I saw a solitary Japanese soldier walking in the middle of Boone Road (Tangku Lu) and carrying his Arisaka rifle, which was longer than he was tall. As he neared the house he fired one shot in the air and the looters dispersed. I expected him to fire another shot, but he evidently knew he had control of the situation and he fired no more.

Finally: You probably watched the Spielberg movie Empire of the Sun. How accurate is it, especially the first part set in downtown Shanghai?

In “Empire of the Sun” I remember hearing the call of a street vendor in the opening scenes, when young Jim is being chauffeured in the family Buick through crowded streets to a Halloween party. The vendor is never seen, but his call indicated that he was selling a Shanghai specialty – “tseh-deh-fu-keh” a square of fermented bean curd deep-fried in oil. The shocking aspect of hearing that call is that such street vendors no longer plied their trade in Shanghai at the time of the filming. During my first return visit to Shanghai in 1984 (the movie was released in 1987) I met a young Shanghai Chinese man who had been hired by the Spielberg production company as an assistant. I cannot credit my Shanghai friend with having introduced the vendor’s call into the soundtrack, but clearly Spielberg had competent Shanghai advisors on his crew who related to him the sounds of prewar Shanghai.

G. Ballard referred to that work as a fantasy, and in fact Ballard himself was in the Lunghwa internment camp with his parents, and was not separated from them. Whereas I could accept that literary license, I found the second half of the movie, filmed in Spain, less palatable. Young Jim sporting a pilot’s leather jacket, with American emblems on it, while in a Japanese-controlled internment camp was one-step too far for me.

I did enjoy the scene in the first half of the movie when young Jim discovers Japanese soldiers near his house during a garden party hosted by his parents. In my memoir I describe a similar scene – I was walking in a village a short distance from Shanghai and suddenly found myself on a narrow path down which I could see a Japanese cavalry squad resting their horses. My dilemma was whether to proceed and face a possibly unwelcome reception, or retrace my steps, possibly giving the soldiers the impression of acting suspiciously.

This interview was conducted by Peter Harmsen and first appeared on China in WW2, which also has a Facebook page 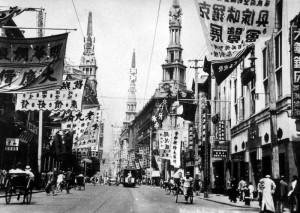