Between alliances in Bangkok 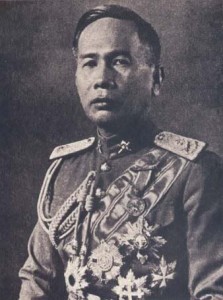 Phibun Songkhram was a leading figure in Thailand's recovery of the 'lost territories' in 1938. The Field-Marshal's alliance was at least a temporary liability. Phibun was ousted in 1944 but had returned to power by 1948. 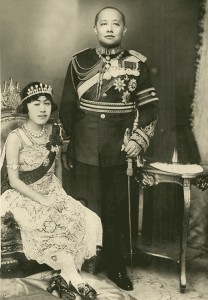 King Vajiravudh and Queen Indrasakdi Sachi were, at the least, concerned about the arrival of 'Jews from the East'

At 2 p.m. Bangkok time, four hours after Emperor Hirohito’s broadcast announcing an end to the war, Japanese Ambassador Yamamoto Kuma’ichi met Thai Prime Minister Khuang Aphaiwong to explain the surrender and assure him that the Japanese forces in Thailand would obey the Emperor’s command. Khuang, fearing a negative Japanese reaction to a plan by Regent Pridi Phanomyong to publicly renounce the Thai–Japanese alliance, took the opportunity to sound out Yamamoto about such a move. The Ambassador, who wished to avoid prejudicing future bilateral relations, raised no objection, giving the Thai a green light to improve their position with the victorious Allies in any way they could.

The meeting came after several tense days in Bangkok. When international broadcasts revealed that Japan had conditionally accepted the Potsdam Declaration demanding surrender, several key officers in the Thailand-based 39th Army had voiced opposition, including the controversial Operations Chief Col. Tsuji Masanobu. Tsuji had flown to Saigon to lobby unsuccessfully against surrender at Southern Area Army general headquarters. On the other hand, the 18th Area Army Commander Lt.-Gen. Nakamura Aketo, who had cooperated closely with Ambassador Yamamoto and maintained friendly liaison with the Thai authorities, had stated that an order from the Emperor would be obeyed.

Immensely relieved by the Ambassador’s reassurance and his cooperation, Khuang and other leaders socialized freely and sympathetically with Yamamoto, Nakamura and other Japanese officials before the arrival of British occupation forces. Such fraternizing greatly irritated American Office of Strategic Services (OSS) officers who had been operating underground in Bangkok, leading them to question the sincerity of the Thai commitment to the Allied cause.

The Japanese command maintained discipline, and the roughly 100,000 soldiers who were either stationed in Thailand or retreated there from Burma posed no problems for the Thai government over the months while they awaited repatriation in 1946. A few Japanese soldiers deserted and remained quietly in Thailand. Tsuji, a prime war crimes suspect, went underground with a few young officer colleagues, entering a Bangkok temple as monks. Tsuji later escaped overland to Nationalist China, where he volunteered his services to Chiang Kai-shek’s Nationalist Government. 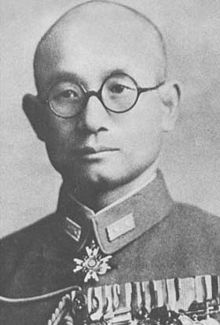 Tsuji Masanobu (ca 1945) was a leading proponent of the concept of 'loyal insubordination'. Among the most aggressive and influential Japanese militarists, he incited the 1939 'Nomohan War' against the Soviets and was a vehement advocate of war with the U.S.