During the long hours after Emperor Hirohito’s surrender radio broadcast, officers and men on military bases and naval ships throughout the Japanese Empire awaited further instruction in a state of confusion, agitation and, for those unable or unwilling to accept what they had just heard, a crushing sense of loss of purpose and will to live. At 4:00 pm, official orders to ‘stand down’ were simultaneously broadcast over the Imperial Army’s and Navy’s respective communications networks.

But not everyone in uniform was comfortable with the idea of continuing to live in a defeated Japan. At Ōita Naval Air Base in northern Kyushu, Vice Admiral Ugaki Matome informed his staff of his intention to die in a kamikaze suicide attack on Allied shipping moored off Okinawa, flying in one of five two-seater Suisei attack planes he had ordered readied for a mission earlier in the morning. His other staff officers desperately pleaded for him to change his mind, saying that postwar Japan would need men like the Vice Admiral to help rebuild the country, but Ugaki would have none of it. Ceremoniously stripping the insignia of rank off of his uniform, putting on white gloves and taking along a short sword (a gift from the legendary Admiral Yamamoto Isoroku), he muttered ‘Give me a place where I can die as a warrior’. Walking out of the command shack to the flight line, Ugaki found not five – as he had ordered – but all eleven of the base’s operational Suisei aircraft armed, gassed up and ready for action. Ugaki ‘bumped’ one of the crewmen – a radioman/rear gunner named Endo – to open a seat for himself. But just before the admiral closed the canopy, Endo clambered back onto the aircraft and forced himself into the cramped cockpit with Ugaki.

At 4:30 pm, the flight of eleven Suisei planes took off from Ōita in the direction of Okinawa. Over the next several hours, three of the planes straggled back to base with reported engine trouble while the remaining eight planes pressed on with their unofficial (and thus unauthorized) mission. At 7:24 pm, the radio shack at Ōita received a message from Ugaki’s Suisei tapped out in Morse code by Radioman Endo: ‘WE ARE GOING IN’. Neither Ugaki nor any of the other Suisei crewmen were ever heard from again.

The fate of the Imperial Japanese Navy’s ‘last kamikaze’ has never been confirmed. Allied forces reported no damage from kamikaze attacks on that day, but a flight of ‘seven or eight’ Japanese aircraft was reported shot down by a patrol of American night fighter planes off the island of Iheyajima around the time of Endo’s radio transmission. 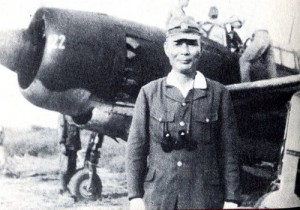 Admiral Ugaki Matome poses with his plane before his final mission. 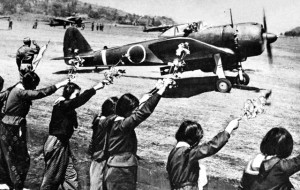