Perceptions of the Emperor’s speech

Outside of Emperor Hirohito, a small circle of influential political and military figures, and a handful of NHK224 radio broadcast engineers, few subjects of the Japanese Empire awoke on the morning of 15 August 1945 expecting that the new day was going to be much different than the previous one, which for most had been spent contributing in one way or another to Japan’s increasingly desperate total war effort. With the exceptions of small children and the bedridden, few Japanese had known any other way of life for a very long time.

But intimations came early that surprises might be in store for this day. When radios across the Empire were turned on for the daily calisthenics program, mass morning ritual, listeners learned that the day’s broadcast had been cancelled. All morning, bulletins delivered over the airwaves, in newspaper extras handed out on street corners, over public address systems, and by word of mouth informed the populace that everyone able to do so was expected to be near a radio at noon for an important message from His Majesty.

Prevailing opinion had it that the Emperor’s would announce commencement of an Allied invasion of the Home Islands. The populace would be told to brace for the imminent onset of ground combat and to steel themselves for the likelihood of their own deaths in the fighting.

At the strike of twelve, Japan time, the Emperor’s high, warbling voice emanated from radio speakers throughout the Japanese Empire, barely audible through the terrible static of the broadcast and speaking an archaic form of Japanese most people had difficulty understanding. But when Hirohito’s short address was finished, a radio announcer came on the air to ‘translate’ into standard Japanese a message few would have ever imagined possible: the Emperor had just told his eighty million subjects that the war was over, that Japan had been defeated, and that the only hope for their culture’s future survival would be by Emperor and subject alike ‘enduring the unendurable and suffering what is unsufferable’. 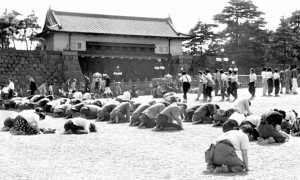 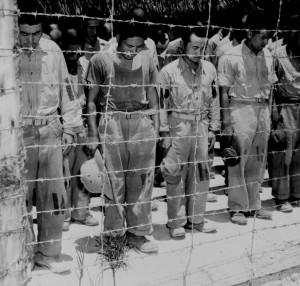