The American cultural and literary historian, Paul Fussell, was un- apologetic in his support for the atomic bombing of Hiroshima and Nagasaki. A World War II veteran who served and was wounded in France, Fussell regretted the bomb was not ready in time to end the German war and thus save the lives of millions of Jews as well as Allied and German soldiers. As for Japan, there is no question in his mind that the bomb was necessary, a case he lays out in his famous essay from 1981, ‘Thank God for the Atomic Bomb’.

In this essay, Fussell describes plans for the invasion of the Japa- nese home islands. They ‘assumed that it would require a full year, to November 1946, for the Japanese to be sufficiently worn down by land-combat attrition to surrender. By that time, one million Amer- ican casualties was the expected price.’ He also quotes at length the author and veteran, E.B. Sledge, who reported that the fighting grew ‘more vicious the closer we got to Japan’, the carnage of Iwo Jima and Okinawa were far worse than what had come before. Sledge recalls:

what we had experienced in fighting the Japs (pardon the expression) on Peleliu and Okinawa caused us to formulate some very definite opinions that the invasion … would be a ghastly bloodletting. It would shock the American public and the world. [Every Japanese] soldier, civilian, woman, and child would fight to the death with whatever weapons they had, rifle, grenade, or bamboo spear.

Nor were there only American lives at risk, Fussell points out. The invasion of Malaya scheduled for 9 September would pit almost 200,000 British-led troops (the same number as used to invade Normandy) against well-defended Japanese positions. ‘But for the atomic bombs’, a British observer intimate with the Japanese defences noted, ‘I don’t think we would have stood a cat in hell’s chance. We would have been murdered in the biggest massacre of the war. They would have annihilated the lot of us.’

While not denying that the atomic bombing of Japan was a vast historical tragedy, Fussell asserts that the international mismanagement of the whole nuclear challenge (not least the capture of the nuclear-power industry by ‘the inept and the mendacious’) should not tempt us ‘to misimagine the circumstances of the bomb’s first “use.”’ President Truman, he argues, ‘knew war, and he knew better than some of his critics then and now what he was doing and why he was doing it. “Having found the bomb,” he said, “we have used it. … We have used it to shorten the agony of young Americans.”’

What Drove Japan's Decision to Surrender?
.
. 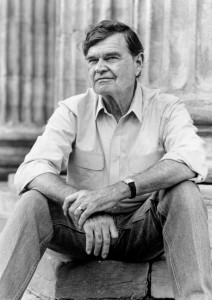 The battle for Iwo Jima lasted more than five bloody weeks. In addition to the appalling human cost, the destruction to the island’s environment was immense. 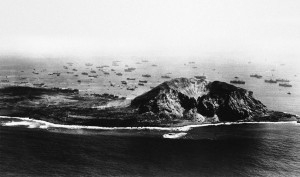 This aerial photograph made on day five of the invasion shows the immense power needed to break the back of Japanese Resistance on Iwo Jima, on March 17, 1945. Just off the beach, landing craft await their chance at the unloading area while small boats from the transports ply back and forth bring assault troops and returning wounded for treatment. Further out, the transports themselves faintly along the horizon, the protective screen of destroyers, destroyer escorts and cruisers can be seen. On the island, Marine tanks can be spotted moving through the rough terrain toward the first airfield at left (AP) 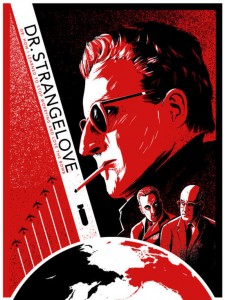 The nuclear question has received a wide range of artistic treatments.